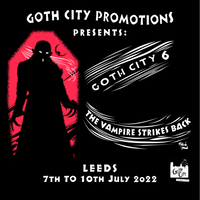 Goth City Festival is a city-wide musical and cultural festival in Leeds that celebrates the gothic and post-punk heritage of the city and of Yorkshire generally. Events include, gigs, clubs, discussions, spoken word, acoustic and social events at several venues in the city centre, including renowned underground venues Boom and the cooperatively owned Wharf Chambers. All proceeds from the festival are donated to PAFRAS (Positive Action For Refugees and Asylum Seekers), a local charity for destitute refugees and asylum seekers. The festival has raised over £15,000 for PAFRAS during its first five years, and this year is held from 7th-10th July.

Goth City's Joel Heyes: "We are truly proud to welcome one of the true legends of Leeds goth to be our Sunday night headliners at Goth City 6. The Rose Of Avalanche are one of the very best acts to be associated with Leeds goth, soon to set off a European tour with The Mission, and we can think of no better way to celebrate the continued success of the scene and the festival in our new summer schedule then by welcoming them to complete this year's lineup. It looks set to be an unmissable event and we are proud to have them as part of it."'